DevDiary: The tech behind Piggy 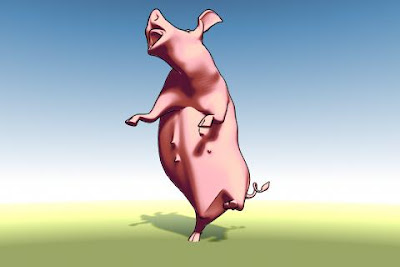 While the recently released Piggy app might not seem like the most technically advance iPhone app ever produced (and it's not), there was an interesting tech problem to be solved.

The animation used in Piggy is pre-rendered 3D animation. Normally, when playing a pre-rendered movie, you might just use Apple's internal movie player and be done. However, with this piggy app, there are about a dozen different animation sequences and they can be triggered in any order. There's no way to pre-cache all the movies - a bunch of 320x480 movies animated at 30 frames per second would just take up way too much memory. And loading the movies on demand using the SDK's supplied movie player wouldn't be ideal. It wouldn't be a very interactive pig if after tapping on a trigger point you had to wait a few seconds before the animation would occur.

So, as I described a few weeks ago, I converted each frame of animation into a PVRTC texture image. This image format is used natively by the iPhone graphics chip, so if I use them as OpenGL textures, then I can load any frame of animation from storage on the fly and get a nice 30 frames per second.
Posted by Mostly Torn at 8:11 PM