I'm very happy to announce the latest iPhone app from Stormy Productions has now been approved by Apple, just in time for the holidays. 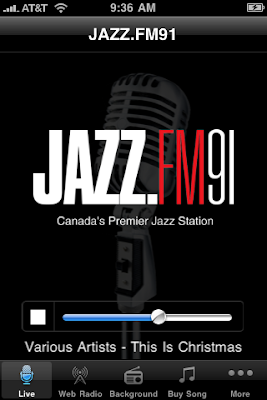 It is an app for JAZZ.FM91, Canada's premier jazz station. You can download it on iTunes here:

JAZZ.FM91 has been listed as "one of the best radio stations in the world" by BusinessWeek.com and it was my pleasure to be asked to create an iPhone app for their station. 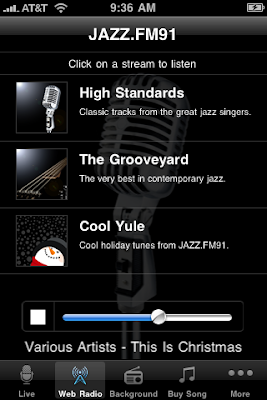 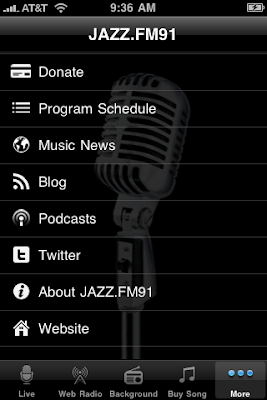 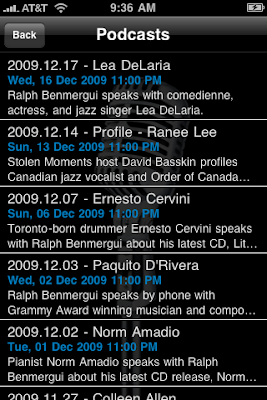 And yes, this iPhone apps uses Stormy's RadioKit SDK to handle the radio station streaming.
Posted by Mostly Torn at 6:17 AM Links to this post

Ten most useful third-party Mac apps (for me)

It seems to be the time of year people come out with top ten lists, so it got me thinking about what third party applications I find get the most use on my Mac. Here they are, in no particular order:

I had been searching for a decent todo list tracker for a while. I had been tempted by OmniFocus, but given the relatively high price, I was hesitant. Based on a recent positive review of Things in MacWorld combined with the fact that there is an iPhone companion app, I figured I'd give it a try. So far I'm happy with it.

When I first got my Airport Express and used it for wirelessly piping iTunes music to my stereo, I thought to myself, "Wouldn't it be great if I could do this from other applications other than iTunes?" Well, little did I know there was an application that did exactly that! Combined with the free Airfoil Speakers program (which runs on both Mac and Windows machines), this application is well worth the $25. Now, using a couple spare laptops, I have music easily piped into whichever rooms in the house I want.

This simple client project tracker / invoicing application has helped me run my software development business for the past year and a half. It easily tracks multiple projects and produces professional invoices. I'm occasionally tempted to get something a bit more advanced so I can also track business expenses for my tax records, but the simplicity of this application has kept me using it.

This application is a must-have for any iPhone developer who has an iPhone app in the iTunes app store. It makes it very easy to track sales, upgrades, app rankings, and reviews in all the iTunes stores around the world. I use it every day.

Previously called EventBox (before RealMac Software bought it), I have a love/hate relationship with this application. It's probably the most frequently used third-party application on my Mac. It's a social networking app that lets you track updates on Facebook, Twitter, Flickr, and a host of other sites. It's extremely handy, but the transition during RealMac Software's migration of the application from the previous incarnation as EventBox was not at all smooth. It was so bad I said I'd never by another RealMacSoftware product, and I currently own all the products they've published (LittleSnapper, RapidWeaver, and Socialite). I think it would be more fair to say I'll never buy another 1.0 release of a RealMac Software product.

I like to take photos. Lots of photos. I have over 13,000 of them. How to keep them all organized and do minor editing work with them while easily preserving the original image? I find Adobe Lightroom to be an ideal solution. It's not cheap ($299), but I don't regret buying it and have been using since it was first released a couple years ago. If you consider yourself an amateur or professional photographer, it's worth consideration.

There are plenty of FTP utilities, and I imagine there might be one better than Fetch, but I seem to use it for sentimental reasons. Many years ago, long before I used a Mac, I worked at a newspaper and was amused by the cute little FTP program that was used in the creative services department on all the Macs there. When you were sending a file, the cursor turned into a pixelated image of a dog running. So, when I eventually started using a Mac myself a few years ago and needed an FTP program, Fetch was the first one that came to mind.

If you want a text editor that recognizes just about every file format a programmer might use, and allows plugins to recognize even more, then this is the program for you. I barely use any of its features, but it's handy for the syntax coloring those times I need to do a quick edit of an XML/HTML/perl/php/... file.

I don't use this program very often, but I include it in the list because it is extremely useful when I do need it. It is an application for doing video captures of anything running on the Mac desktop. I mainly use it for making demos of iPhone apps running in the simulator, but have used it on occasion for making tutorials on how to do different things in Xcode.
Posted by Mostly Torn at 2:20 PM Links to this post

I've put together a new PDF documenting all aspects of the RadioKit SDK. It can be found here:

This document provides a description of all the class methods, properties, and protocols and gives a very basic example of how the class is used.

As mentioned previously, a complete XCode demo project is also available upon request if you'd like a free evaluation of the SDK.
Posted by Mostly Torn at 12:57 PM Links to this post