I'm almost finished with Stormy's Radio Thing. Just have some tweaks of the user interface and then it should be ready for submission. Hopefully I'll have some free time to finish it this week. Since it's a free app, I'm working on it with any spare time I might have between my paying iPhone jobs.

This will be a free radio app which allows playing any custom stream URL and also supports browsing and searching the complete Shoutcast directory of thousands and thousands of stations. And, again, I should stress, it will be completely free of banner ads.

Here are some screenshots of how the app is progressing: 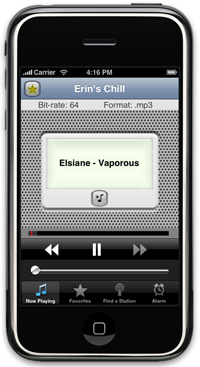 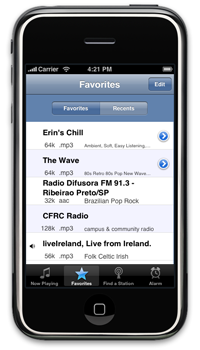 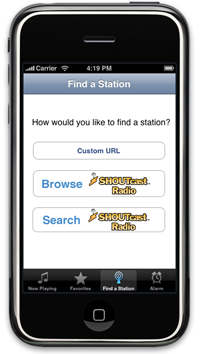 Posted by Mostly Torn at 1:26 PM Links to this post

I have a new FREE iPhone radio app in the works, called Stormy's Radio Thing. I might change the name - it is kind of (intentionally) goofy.

It is a general-purpose radio player - allowing playing of custom stream URLs as well as have complete access to the Shoutcast directory.

Here are the features it currently has:

* MP3, AAC, and HE AAC v1 support
* Custom URL support for adding streams
* Support for m3u, and pls files
* Access to Shoutcast directory, browse genres and direct search
* Support for marking stations as favorites to add to a list of easily accessible "presets"
* Support for pause, rewind, fast-forward timeshifting of the audio
* iTunes tagging
* Alarm clock - wake up with the music from your favorite online radio station
* NO banner ads - ever. This is a FREE app and will always be free of ads.

Are there any other features you might like to see in a general purpose radio tuner app? If you have any feature suggestions, feel free to leave a comment.

There are some things that will not be doable, such as support for HE AAC v2. It requires patent licensing fees, which is not feasible for a free app. If Apple at some point adds support for HE AAC v2 to the iPhone SDK, then I can piggy-back on that, but otherwise it's not going to be possible.
Posted by Mostly Torn at 10:18 AM Links to this post

It's been said by many developers before, but I'll add my voice to the gripes. Apple's iPhone app approval process needs some serious fixing.

Like any process, it's great when it works, and many developers are fortunate enough to never have to see the ugly side of it. If your app is approved in a timely manner, what's to complain about? But a true representation of a company's customer service comes into focus when there is a problem. And that's where Apple fails miserably.

First of all, there is absolutely no transparency or communication. And when I say communication, I am referring to a dialog. Boiler plate text saying your app "is requiring unexpected additional time for review" is not communication, especially when further queries weeks later to Apple get another boiler plate reply that says the oh so very helpful, "there is no additional information to share at this time".

Why can't Apple simply state the reason for the delay up front? In all the times I've had an app in this state of "requiring unexpected additional time for review" (4 so far out of dozens approved), I've eventually (many days later) received a phone call from someone at Apple who tells me Apple is taking issue with a specific aspect of my app and they want me to change it. It's almost as if they don't want to put it in writing because it's a grey area case. It's never been something that was part of Apple's official written policy.

And even in this case of speaking with someone on the phone, it's not a dialog. It's basically a command - change this. Asking for an explanation of "why" hits a wall. For example, if I ask why my app can't do this when X number of other apps already approved can, it is politely declined to be answered. The best I can get for response is "I can't comment on that," and this is when I'm actually speaking to someone on the phone. Email is worse - it is simply ignored.

Now in my case, I'm producing apps for a third party - mainly radio stations. This lack of information from Apple adds further complications and potential bad press for Apple. All I can tell my client is their app is in "Apple limbo" and that Apple refuses to provide any additional information. When they ask when it might be approved, the only concrete quote I have from Apple to relay to my client is "there is no additional information to share at this time". What kind of good business practice is that?? What other business can get away with treating their customers like that? I certainly won't treat my clients that way. Because of the unpredictability of Apple's approval process, I specifically do not ask for final payment for my development work until the app is approved by Apple. So, these delays from Apple with no explanation are directly affecting my income.

The second problem is the inconsistency of the review process. One app gets approved with feature set X and another with identical features gets rejected. For example, I submitted two apps on the same day. Both were radio apps for different radio stations and contained identical features. One app was approved after a week while the second app received the dreaded this app is "taking unexpected additional time for review" email. It's been over a month now and this second app still hasn't been approved. I even got the eventual call from Apple telling me I need to change a phrase in the app description and was also told once I did this the app would be all set. The other app that was approved contained this exact same phrase. In fact, both these apps were updates and have had the same descriptions since they were approved by Apple last Fall! So, I immediately changed the text Apple found offensive, and now several weeks have gone by and no word on the app being approved. All Apple is willing to say is "there is no additional information to share at this time".

Now, I realize it is Apple's store and they can do whatever they want. They reserve the right to refuse an app for any arbitrary reason - it's in the contract. But treating developers like crap whenever that is a problem is not the best way to do business. When there is a problem, that's when a developer needs help or guidance from Apple the most. Instead, we get a firm "Screw you! It's our store and we can do as we like. Don't bother asking us for help."

At some point, if something better comes along I'll say enough is enough and will spend my time developing software for a different platform. According to the latest stats, I'm only one developer out of 100,000 registered for the iPhone. I'm sure Apple won't even notice I'm gone. But if Apple continues to annoy enough developers and enough developers voice their complaints, maybe Apple will make some much needed changes to their business process.

[EDIT: For a much better written complaint about the approval process, I suggest this article: http://tech.yahoo.com/news/infoworld/20090720/tc_infoworld/83773_1 by Peter Wayner. He covers things in much greater detail and hits every point that has been bothering me - even ones I hadn't mentioned.

And for a very accurate summary of how a phone call "conversation" goes with Apple, read this blog post. I can confirm from personal experience that it is no exaggeration.]
Posted by Mostly Torn at 11:09 AM Links to this post

For some unknown reason it took a lot longer than usual (3 weeks!), but Apple finally approved my latest update for Radio Paradise. Version 1.6 is now available as a free download on iTunes.

The big difference in this update is support for buffering about 10 minutes of previously played audio. So, you can now both rewind and pause the live stream, and then fast forward back to the "live" part of the stream.

You can read more about the app here.