Much to my disappointment, I accidentally introduced a bug into the 2.0 version of Tunemark Radio, causing the app to crash on launch on devices running iOS 3.x. Thankfully, Apple let me put through a rush update to fix the problem, so the new 2.0.1 version now available on iTunes fixes the problem for those people with an iPhone or iPod Touch running iOS 3.x.

Unfortunately, I hadn't realized the same bug also existed on any iPad that is still running iOS 3.x. and the 2.0.1 update does not fix that bug.

I had been in the process of creating an improved version of Tunemark for the iPad, and had it nearly complete this weekend when I started receiving reports of the iPad 3.x problem, so I decided to roll the new iPad look for the app into this bug fix update.

So, yet another update is now pending review with Apple, this time addressing the problem for those with an iPad running iOS 3.x., but also with the bonus of (in my opinion) a much better UI for iPad. Here's a screenshot showing how it will look on iPad: 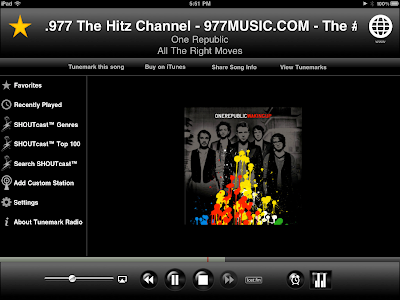 Hopefully you will agree this is a much better look than what is currently Tunemark Radio on the iPad.

And in case anyone was curious what country-western music looks like in Japanese, here's another screenshot: 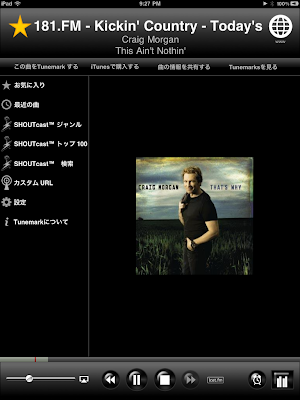 You can tap on either image for an iPad-sized version of the screenshot.
Posted by Mostly Torn at 6:50 PM