I was pleasantly surprised this morning to discover Apple currently has a list of featured radio apps on the iTunes store, and Stormy Productions was involved in the creation of 10% of those apps.

There are two lists, one for iPhone apps and one for iPad apps.

The iPhone list contains 30 apps, and I've had a hand in the creation of 4 of those apps. Specifically, I wrote all the code for both the Tunemark Radio and JAZZ.FM apps. I also wrote all the radio streaming code and the "now playing" portion of the user interface code for the Public Radio App. And finally, I wrote the radio streaming code used by the PRI app. (A good friend of mine wrote the rest of the code for the PRI app - congrats Rob!). 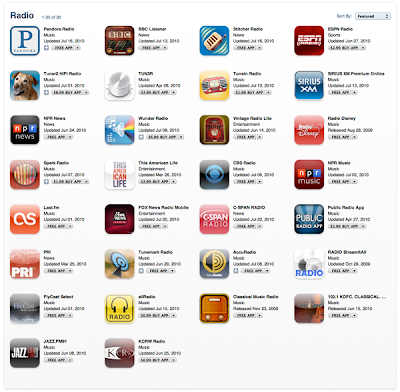 For the iPad list of featured radio apps there are only 11 apps listed, and Tunemark Radio is one of them! 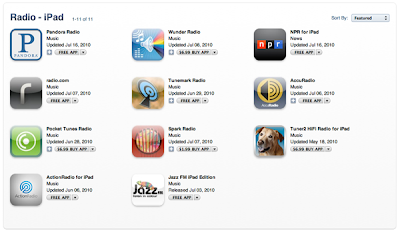 As an iPhone developer, one always hopes to some day have an app make Apple's "featured" lists on the front page of iTunes, so I am unbelievably happy today to have several make one of Apple's lists.

As for what effect this exposure has on app downloads, I only have access to the stats for the Tunemark Radio app (the rest of the apps are under other developer accounts), but I can say, for my Tunemark Radio app, after one day being on this featured radio app list, the number of downloads have more than doubled. The average daily download count jumped from 500 to over 1100.
Posted by Mostly Torn at 8:16 AM